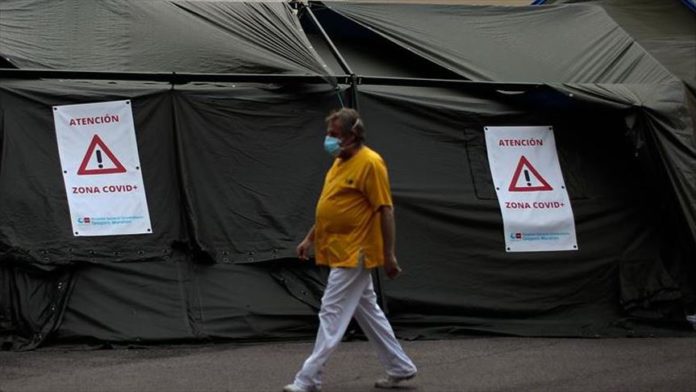 Spain saw a surge of new coronavirus cases this weekend, unseen so far in the post-lockdown period, according to data released by the Health Ministry on Monday.

The data shows that the number of confirmed infections since Friday increased by 1,244, bringing the total number of registered cases to 251,789.

The spike in cases is significantly higher than that in previous weekends over the last month.

Spain has been dealing with dozens of active outbreaks. Two got so bad this weekend that lockdowns were imposed in parts of Galicia and Catalonia.

The affected areas, home to around 270,000 people, have been isolated from the rest of Spain and placed under more restrictive social distancing conditions.

Health Minister Salvador Illa has said that the country’s strategy is to enforce “targeted” or “surgical” lockdowns in the places where the virus is spreading most rapidly.

Much of Spain has been operating in the new normal since June 21, which is when the state of emergency came to an end. People are returning to normal activities but masks remain mandatory wherever 1.5 meters (4.9 feet) of distance cannot be kept between people.

On Monday, Spanish researchers also published the government-backed serological study of COVID-19 immunity in the country in the medical journal the Lancet.

Some of the most notable findings include the claim that around one-third of all people who were found to have COVID-19 antibodies were asymptomatic.

The survey, which looked at a random sample of around 70,000 Spaniards, found that 5.2% of those tested had antibodies. That suggests that around 2.5 million people in Spain have been infected so far.

42% of Muslims in France harassed at least once: Report

April 2, 2020
We use cookies to ensure that we give you the best experience on our website. If you continue to use this site we will assume that you are happy with it.Ok