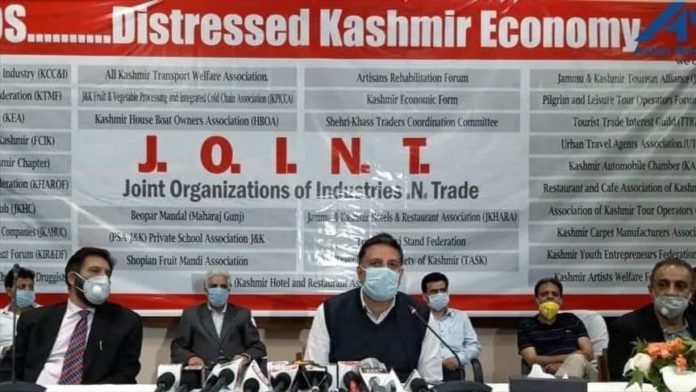 Dozens of trade bodies in Indian-administered Jammu and Kashmir on Wednesday demanded a stimulus package for the revival of businesses in the disputed Himalayan region.

At a news conference in the capital Srinagar on Wednesday, members of the business community said Kashmir’s economy has suffered heavily since the 1990s.

They said the lockdown enforced by New Delhi after revoking the region’s special status last August had dealt a crippling blow to hopes of an economic revival.

The group of 32 trade bodies said the Indian government must waive interest on loan amounts since Aug. 5, 2019, and provide a stimulus package to boost business activities.

They said Prime Minister Narendra Modi has pledged 20 trillion rupees ($265 billion) to help the Indian economy recover from the three-month coronavirus lockdown, but Kashmiri traders received no assistance over the past 10 months.

“We have suffered immense losses since last year. It was the government’s decision to ask local and foreign tourists to leave the region and they have not returned ever since,” Sheikh Ashiq, president of Kashmir Chambers of Commerce and Industries (KCCI), told Anadolu Agency after addressing the news conference.

“For the past 10 months, there has been no business activity in Kashmir. People associated with and dependent on local industries are dying. The conditions have only worsened and our losses are running in the billions.”

He said it was essential for the government to immediately introduce some financial and welfare packages to help Kashmiris.

The trade bodies also demanded the restoration of high-speed internet in the region, which has been cut off since last August, and proper maintenance of highways.

“Online businesses and students are in a crisis. High-speed internet is badly needed here and its suspension has badly impacted our economy and children’s education. The government must restore it now,” said Ashiq.